Here’s a fun MC Escher-like experiment; make solids splash! One of the reasons we love Photoshop is that you can make surreal images that seem impossible. Here I combined a kid in a superhero cape with splashes to create a unique “splashing superhero kid.”

I started out with a stock image I had bought previously from ShutterStock.com. 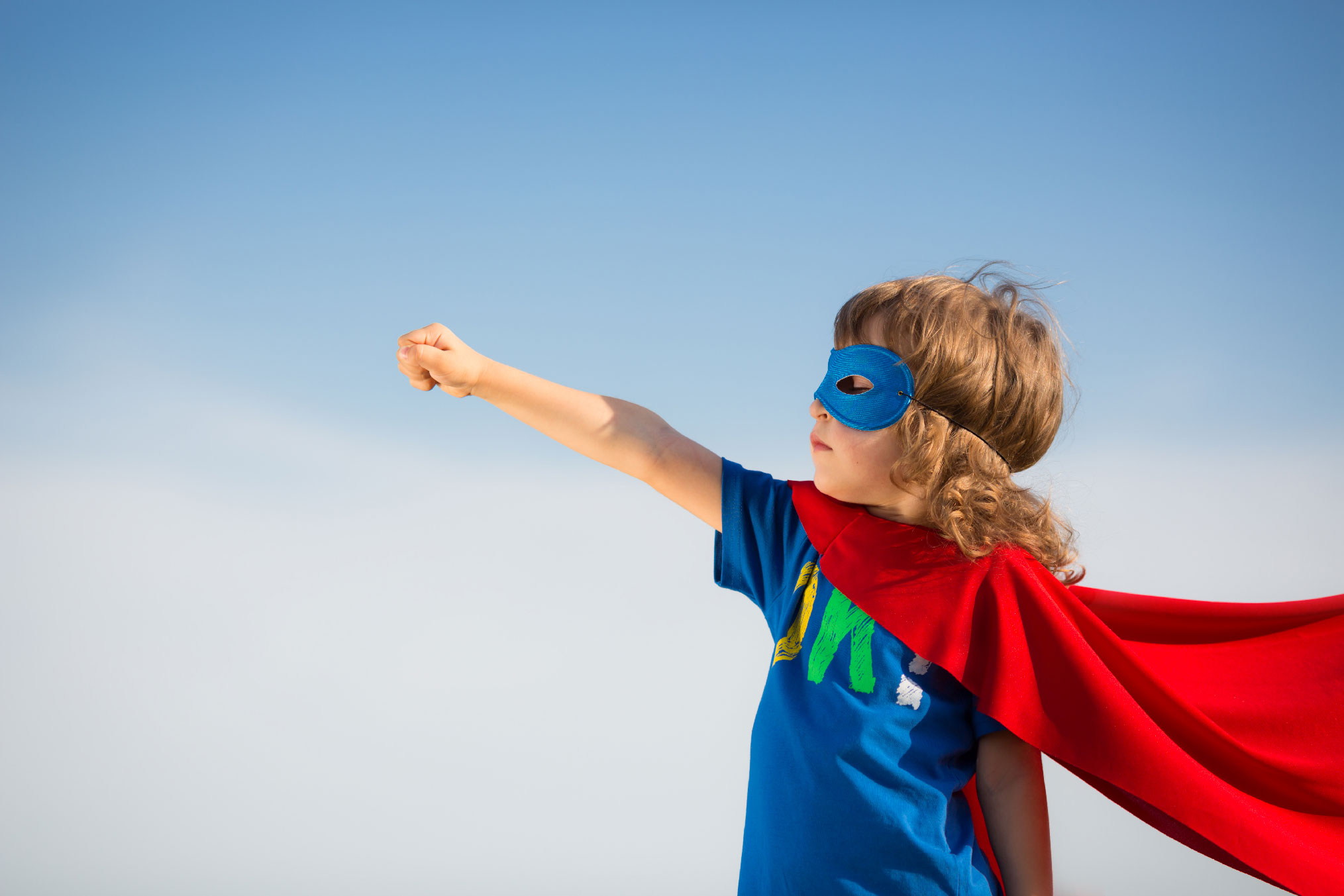 I made the Layers Panel show by typing F7. I converted the Background to a Layer by double-clicking on it in the Layers Panel to make it a separate layer, then changed the default name of “Layer 1” to “kid in cape.” It is always a good practice rename your layers to something meaningful so that you can easily find the one you want. Later on, you won’t remember which image is on “Layer 1.” Then I increased the size of my canvas (type⌥⌘C) to give me more room to work with. I saved the document as a Photoshop PSD file under a new name to protect my original file, just in case I need it again. Finally, I rotated the “kid in cape” layer with the Free Transform Command (type ⌘T) until he looked like he was flying. 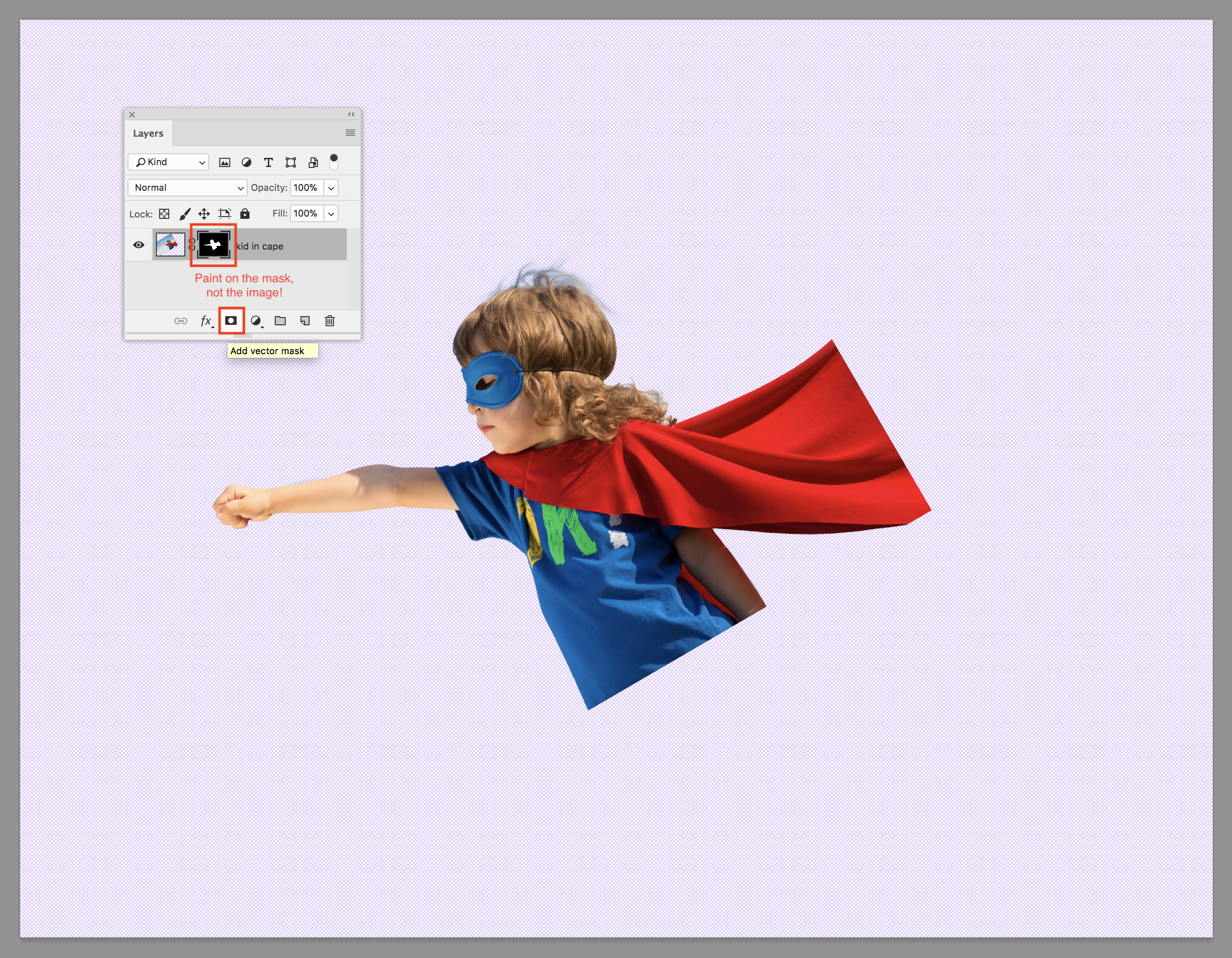 I selected the mask, not the image, by clicking on it, which is confirmed by the little black line around its icon in the Layers Panel. Then I selectively erased some of my mask to show some of the wisps of hair, which I felt was important to convey movement. I used a black, soft-edged Brush Tool (type a B) and changed its opacity by typing a number (1=10%, 0=100%, etc.). I wasn’t worried about removing every little bit of sky between the hair wisps because I planned to add a new sky image at the end. (The reason for wanting a new sky is that rotating kid also rotated the sky behind him and now the horizon was wrong.)

If your project requires removing the background from every wisp of hair, you can Google it and find lots of tutorials out there. I like this one from Clipping Path India.

The next step was to add a water splash! I didn’t have any water splashes with the background already cut out, so I went to NoBacks.com and searched through what they had. NoBacks.com offers their images for free and asks only that you give credit where it’s due. Here is the one I selected: 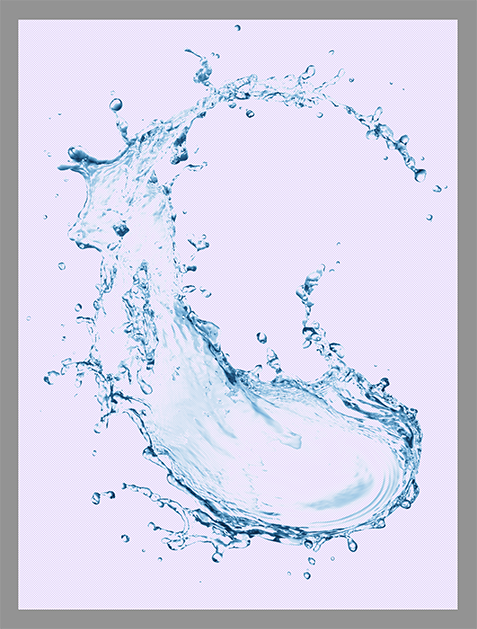 As you can see by the purple grid in the background, my selected image has a lot of transparent areas. I dragged it into my Photoshop document, renamed its layer and used the Free Transform Command (type ⌘T) until I had rotated the water splash to look like the lower half of the kid’s body. But the cut-off kid’s body showed through the transparent parts of the water splash. This was no bueno. To solve this problem, I created a new layer (type (⇧⌘N) under my water splash layer and renamed it “fill in water.” Using the Eyedropper Tool (type an I), I selected the lightest color in my water splash image to make it the Foreground Color, verified that I had the “fill in water” layer selected, then used the Lasso Tool (type an L) to roughly select an area to cover up the kid’s body. Next, I filled the selection (type ⇧F5 and choose Foreground Color) and deselected (type ⌘D). I used a soft-edged Brush Tool (type a B) to paint a softer edge on my “fill in water” until it looked natural. Lastly, I put the two water layers in a folder by clicking on both of them while holding the Shift Key (⇧), then clicking on the three horizontal bars and choosing “New Group from Layers” from the dropdown menu that appeared. I named the folder “body splash.” 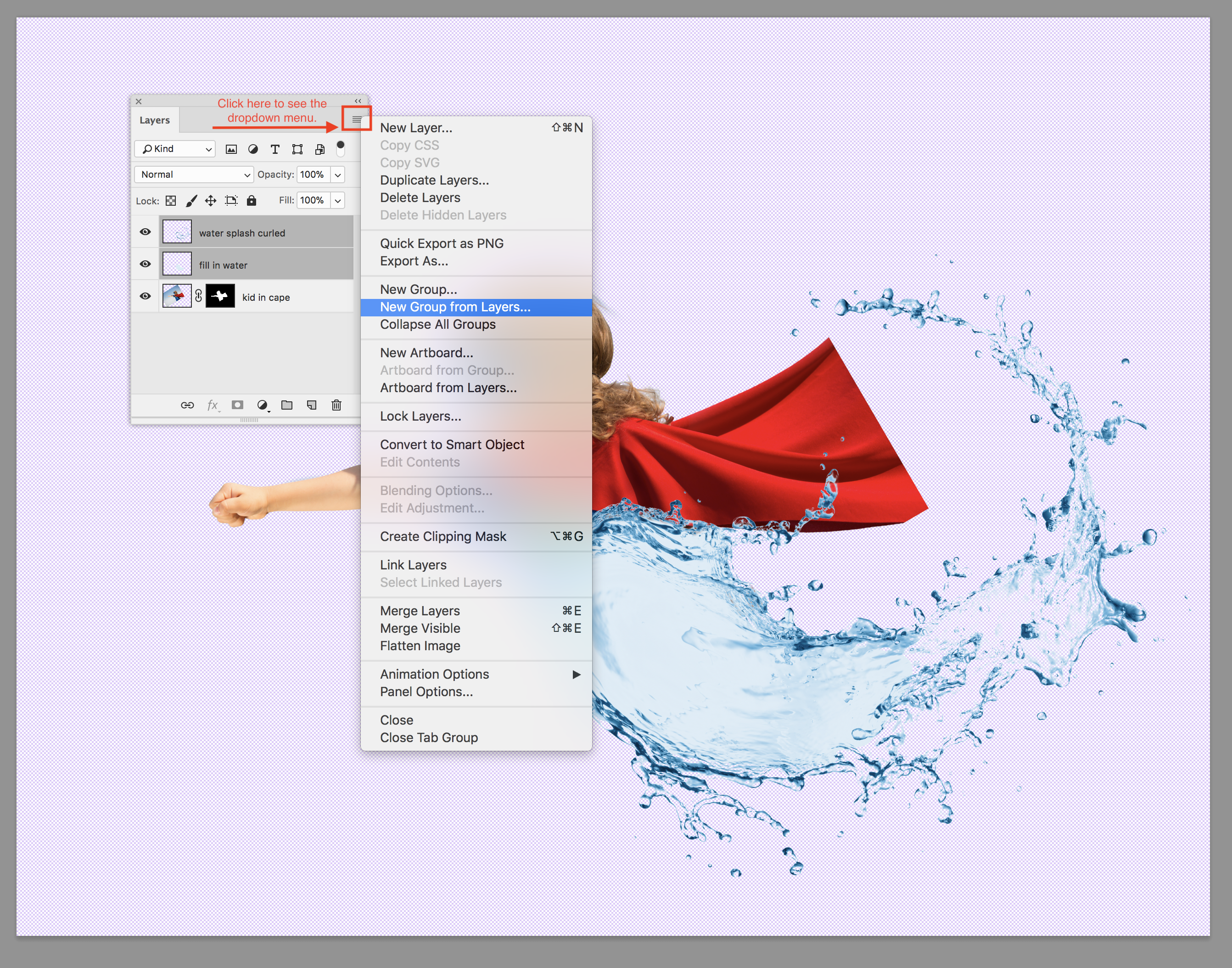 With the new group selected, I added a mask and began to selectively paint with a black, soft-edged Brush Tool (type a B) until the water splashes blended into the kid’s body. I also masked out some of the curl in the water splash where it overlapped the cape. When I got that done, a little bit of the kid peaked out around my water splash, so I painted some more on the kid’s layer mask until everything looked right. 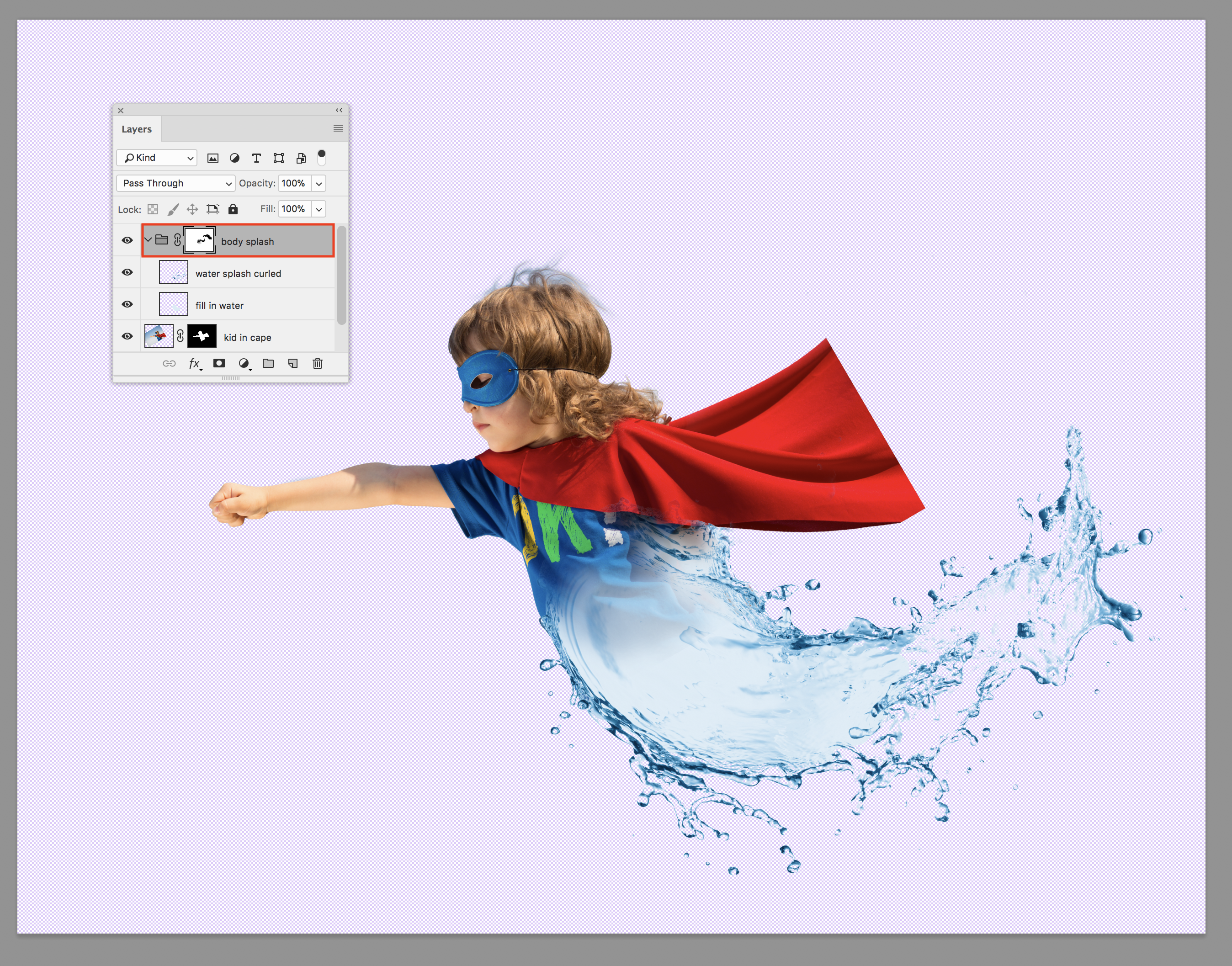 The next step was to make the splash the same blue as the kid’s shirt. First, I made a new layer (⇧⌘N) above the water splash group and renamed it “blue shape.” Then I took the Lasso Tool (type an L) to roughly select an area surrounding the water splashes. Using the Eyedropper Tool (type an I), I selected the blue color from the kid’s shirt to make it the Foreground Color and filled the selection (type ⇧F5 and choose Foreground Color). 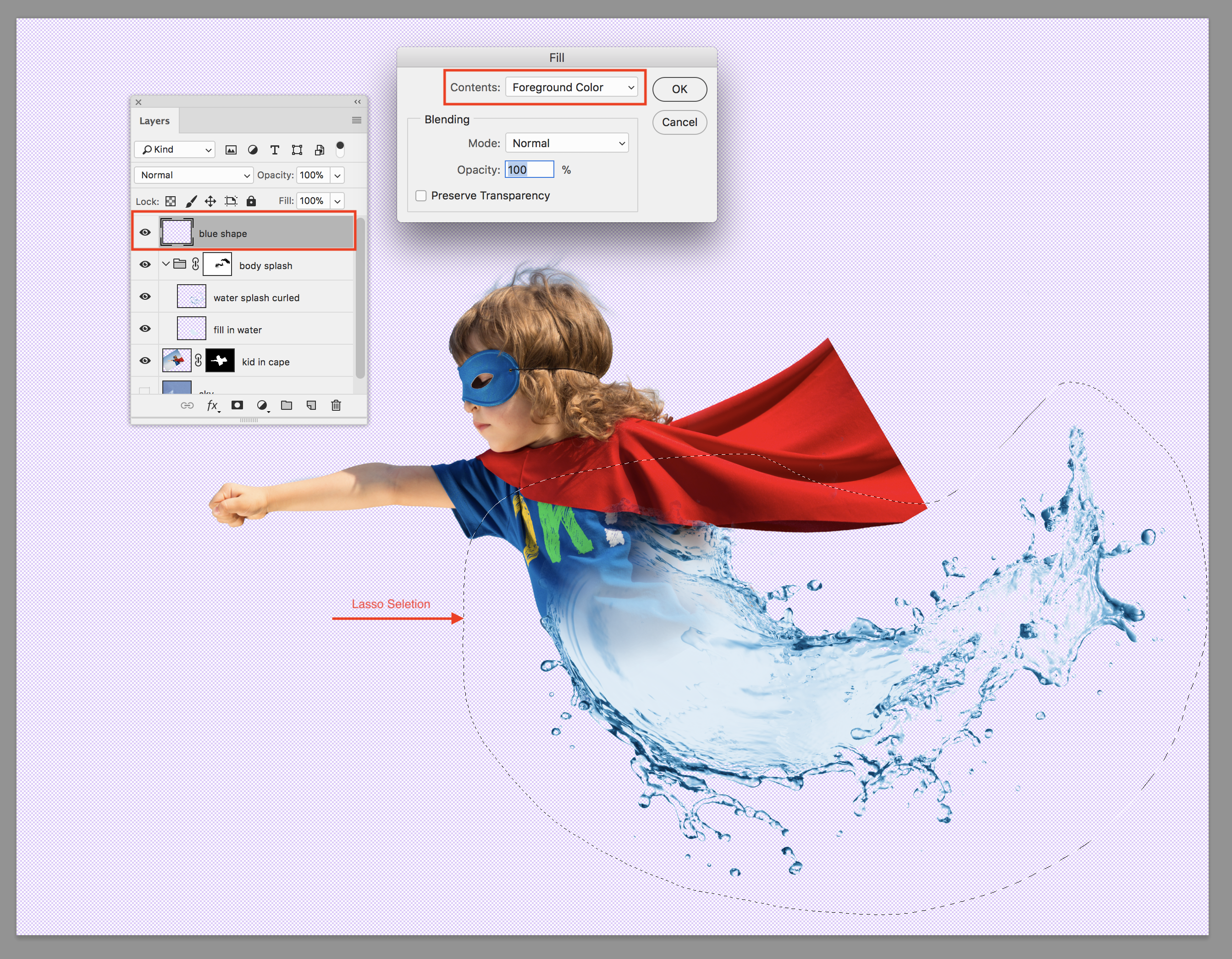 Well, that looked strange! But stay with me. I played with the Blending Mode until the blue shape turned with water splash the same blue as the kid’s shirt. Then I moved my cursor to the line between the “blue shape” layer and the “body splash” group, held down the Option Key (⌥) and clicked once to create a clipping mask that only affects the “body splash” group. But there appeared a hard edge where I had painted on the “fill in water” layer that I didn’t like. 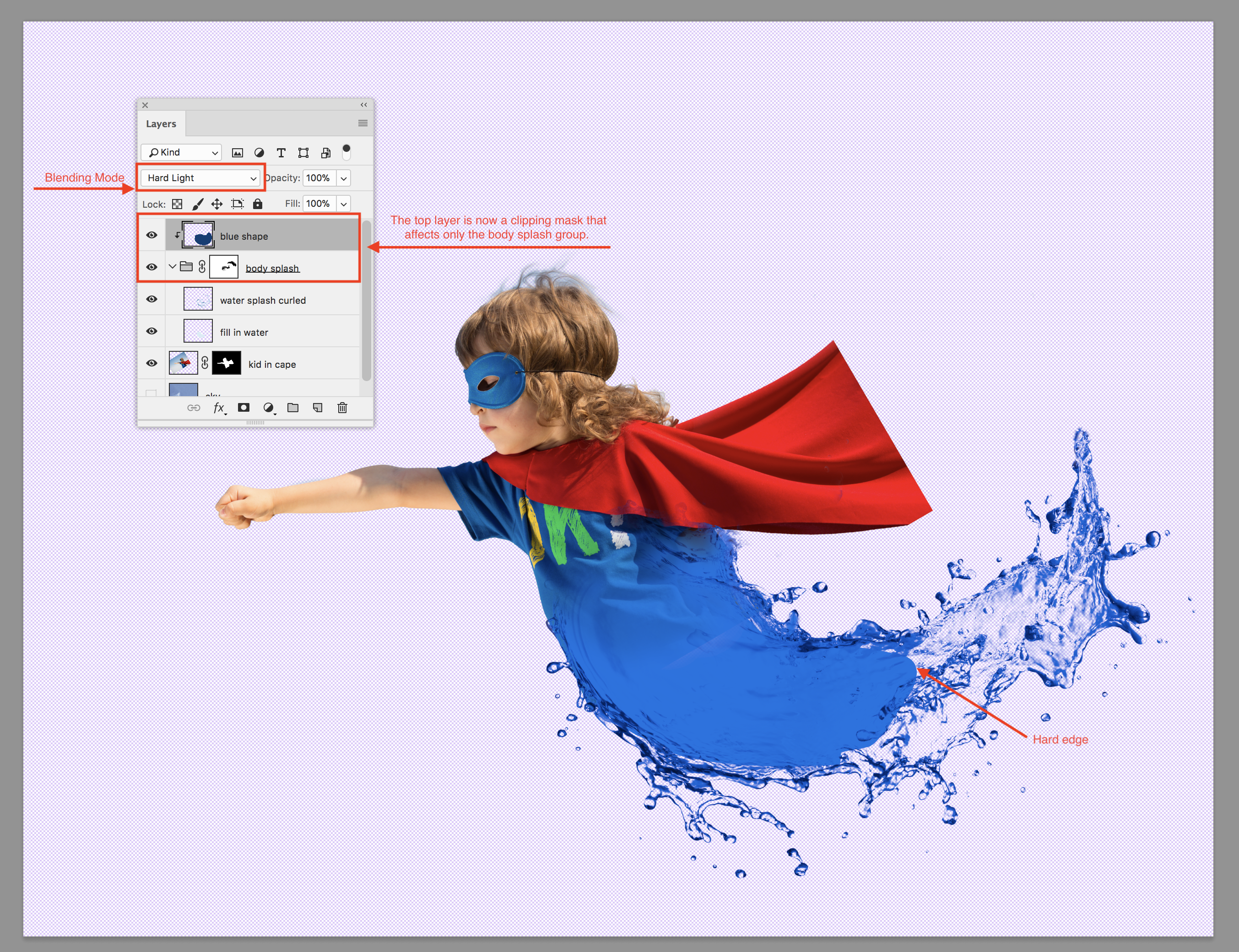 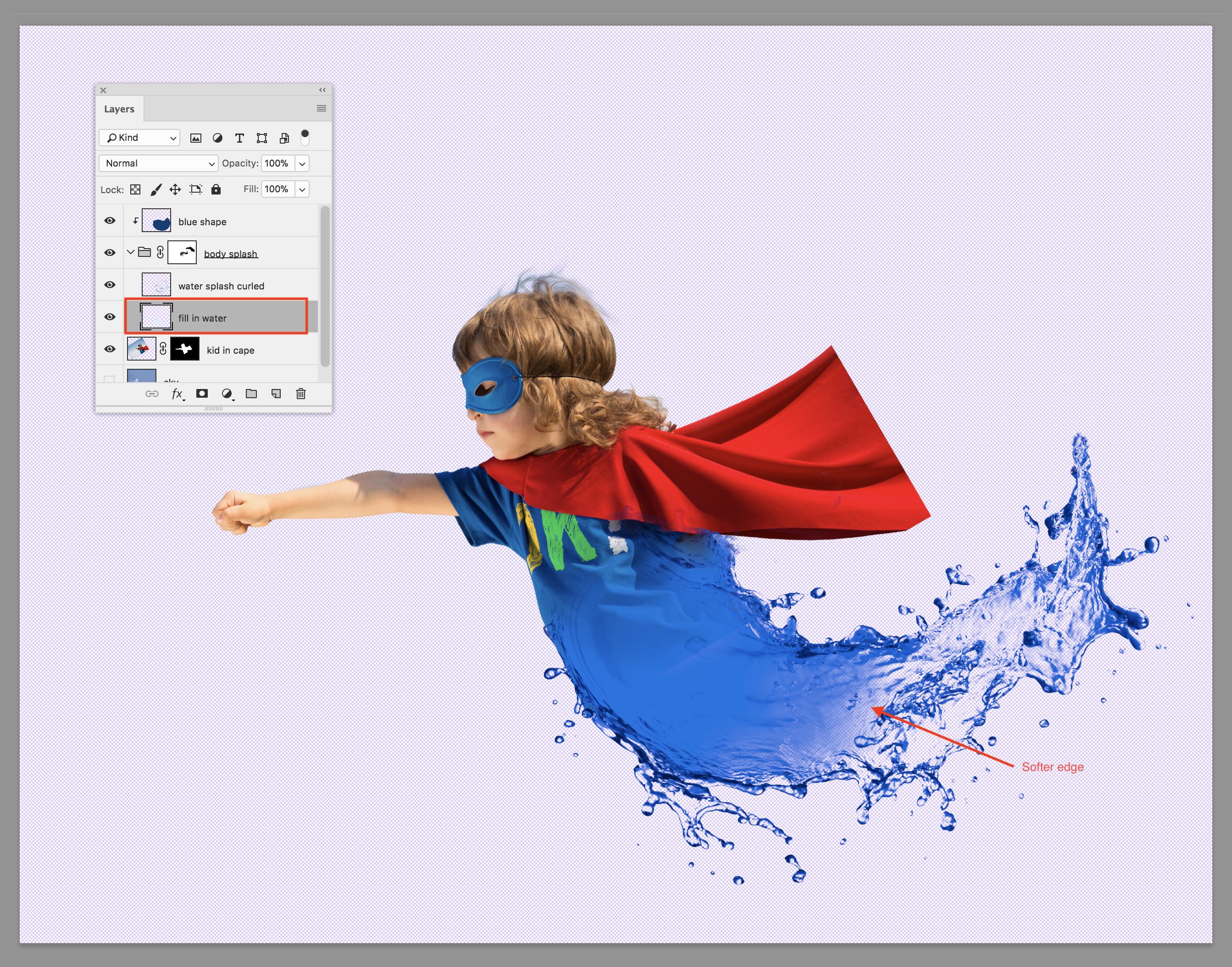 The next step was to repeat this process and make the red cape splash like water. I went back to NoBacks.com and selected another splash image. Here’s the image I chose: 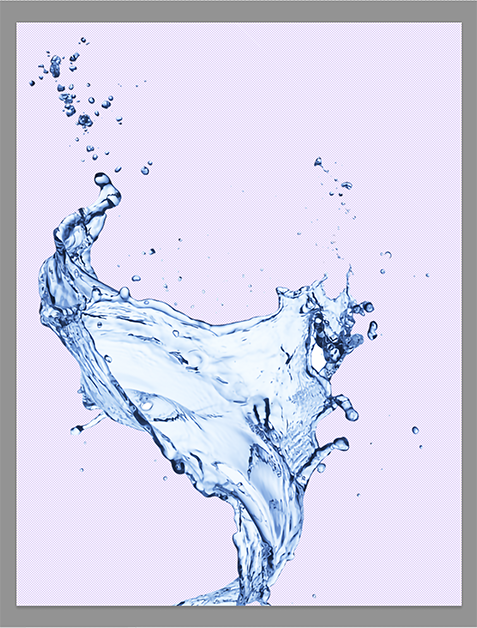 This splash image did not have any transparent spots in the middle, so I did not need to create a fill-in layer. I dragged the new splash image to the top layer of my Photoshop document, renamed it “cape splash,” and rotated it with the Free Transform Command (type ⌘T) until it looked like a part of the cape. I made a new layer (⇧⌘N) above the cape called “red shape,” selected a red from the kid’s cape with the Eyedropper Tool (type an I), and filled the selection (type ⇧F5 and choose Foreground Color) and deselected (type ⌘D). I changed the Blending Mode on the “red shape” layer until the splash looked the same red as the cape and Option-Clicked the line between the two layers to create a clipping mask that only affects the “cape splash” layer. I finished up by adding a mask and selectively painting on the mask with a black, soft-edged Brush Tool (type a B) until the “cape splash” layer looked like a part of the cape. I added to the mask on the “kid in cape” layer to hide the spots where the cape showed outside the “cape splash.”

Here’s what I got: 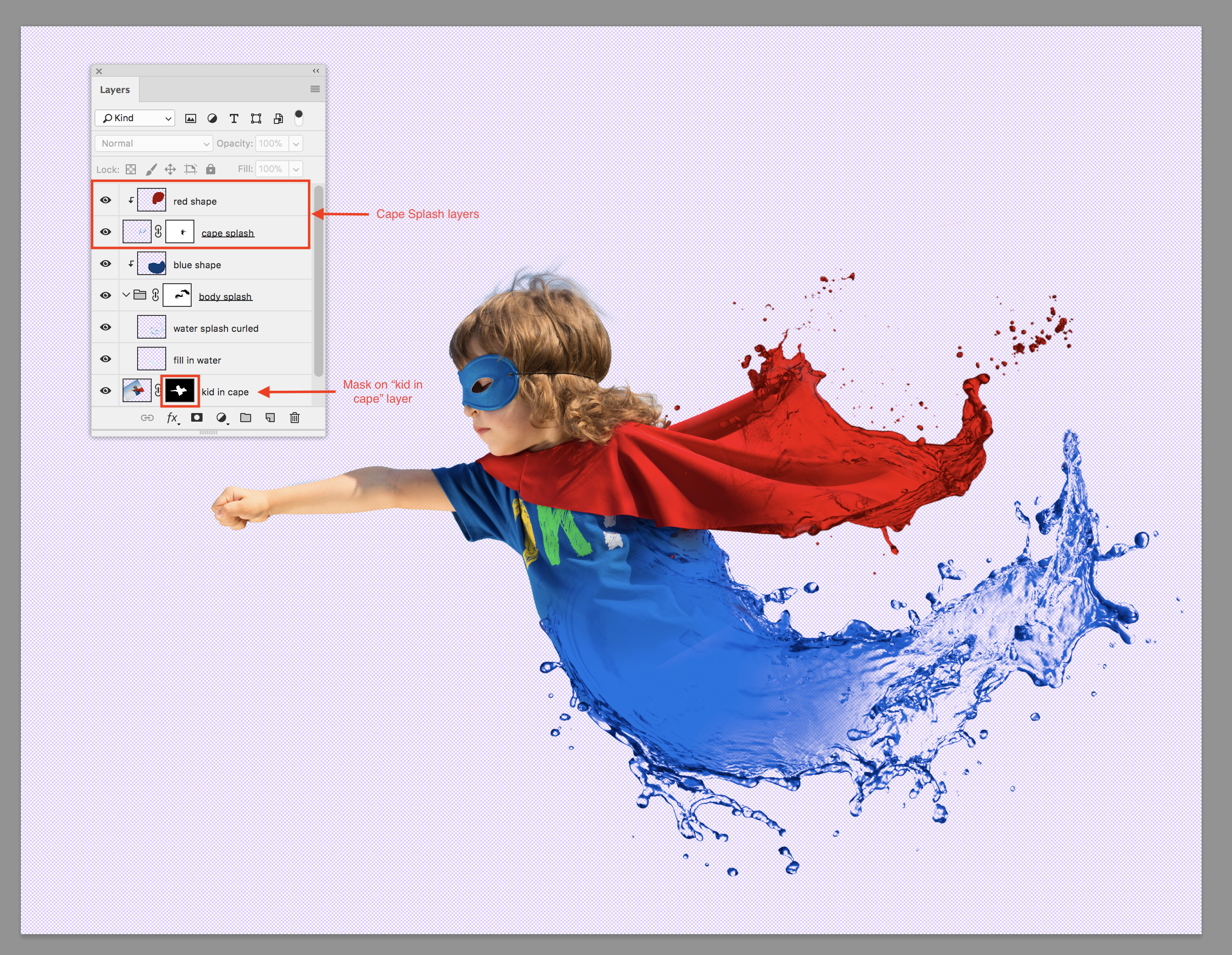 Now to add a new sky and see how it looks! I added a sky photo from my previously purchased collection that I bought from Dynamic Graphics, which is out of business now. Whoops, the blue splash doesn’t contrast enough with my sky. Good thing I’m working in layers! All I need to do is change the Blending Mode on the “blue shape” layer from Hard Light to Linear Light to increase the contrast so more folds in the shirt and bubbles in the splash show up. Then I thought that the sky should be a little lighter, but I didn’t want to permanently alter my sky image. So, I added an adjustment layer by clicking on the half black, half white circle at the bottom of the Layers Panel. I moved the sliders around until I got the differentiation in blues that I wanted. 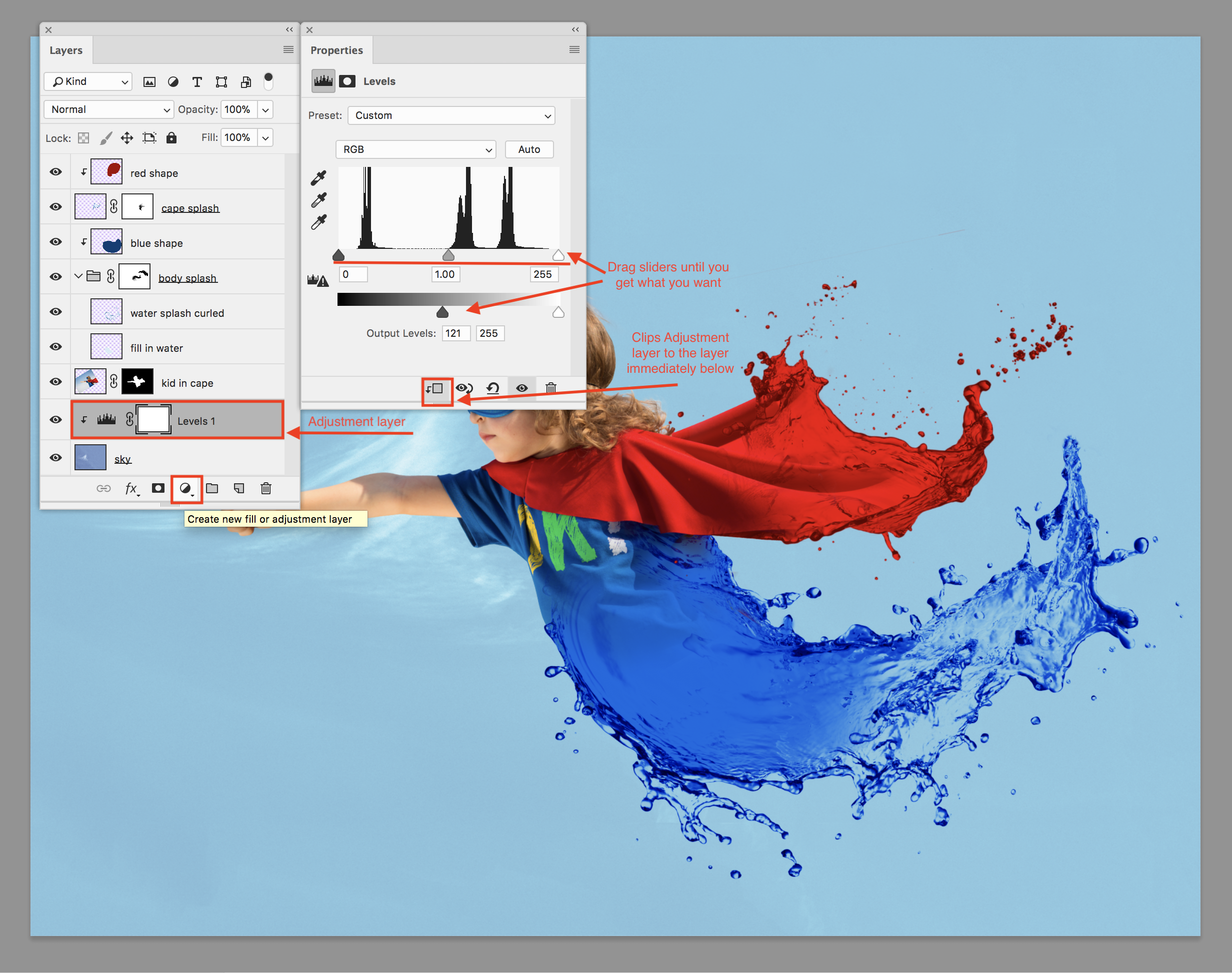 Then I was done! Here’s how the final piece looks: 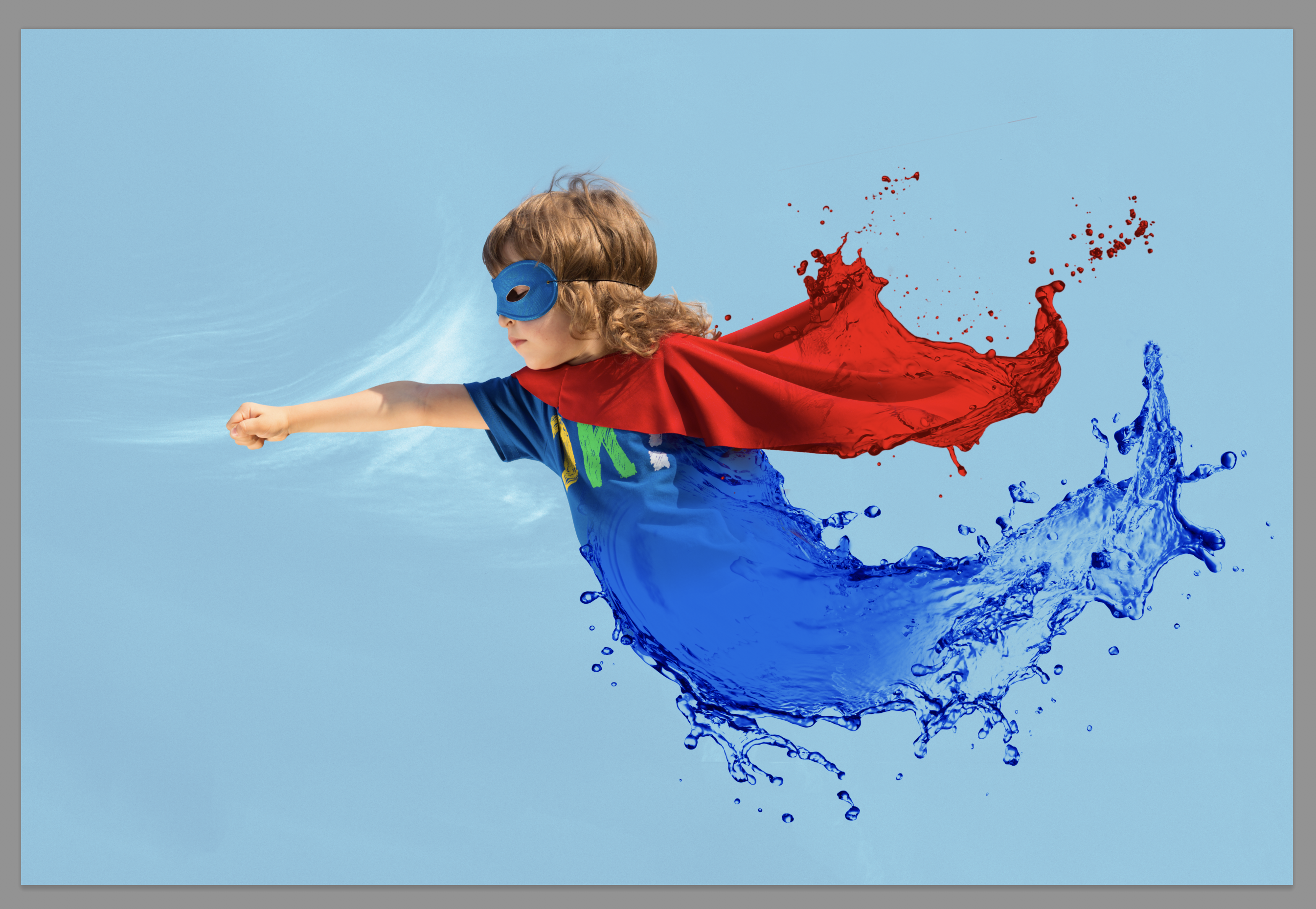